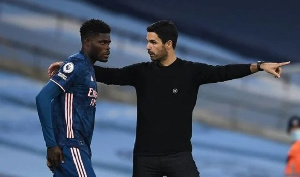 Arsenal manager, Mikel Arteta has disclosed that he will not stand in the way of Thomas Partey joining the Ghana squad for the 2021 Africa Cup of Nations (AFCON) tournament.

Currently, one of the key players at the English Premier League club, the former Atletico Madrid midfield powerhouse has been invited by Black Stars head coach Milovan Rajevac for the upcoming AFCON in Cameroon.

Although Mikel Arteta admits he wishes the player was not going, he notes that he understands the player and all other African players have other obligations to their countries and hence he will not prevent them from going to the AFCON.

“We need them all but I understand that they have their obligations and we have to let them go,” the Arsenal manager said at a press conference.

On losing a lot of players and having a small squad during the AFCON, Mikel Arteta said his team would have to adapt and cope with the situation.

“That would be ideal but with the African Cup of Nations, we’re going to have many less, unfortunately.

“We’ll have to adapt. I don’t know how the situation is going to develop, we’ll be better or hopefully better [on the Covid front] because we’ll have more boosters and more people will already have had it. We don’t know,” he shared.

Thomas Partey is expected to travel to Doha, Qatar at the end of the weekend to join his Black Stars teammates for a pre-tournament camp.