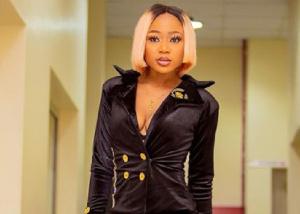 Rosemond Alade Brown, aka Akuapem Poloo, decided to hide the sudden turn of events in her life from her young son by lying to him about her whereabouts when she was jailed.

According to the socialite, that was the best way she decided to preserve her son and to protect him from suffering any early childhood trauma as a result of her absence.

In an exclusive interview with SammyKay, Akuapem Poloo who has finally been granted a reprieve after spending few days in jail said she told her son she was in Nigeria when she was taken away from him.

“I told him, I was going to Nigeria to work and my mother also tried to convince him with the same message. I didn’t know how he would feel so I decided to lie to him,” she said.

Akuapem Poloo said she could not stand the thought of leaving her son behind for the next three months so she decided to lie to him for him to stay focused in school.

Akuapem Poloo was sentenced to jail for 90 days by an Accra Circuit Court on April 16 after she was convicted on her plea on charges of posting a nude picture of herself and her son on social media.

On Friday, December 17, 2021, Akuapem Poloo paid a GH¢12,000 fine which was imposed on her by the Court of Appeal in Accra after overturning her custodial sentence.

She, however, filed an appeal seeking to overturn the ruling, but the application was dismissed by the Accra High Court on December 1, 2021.