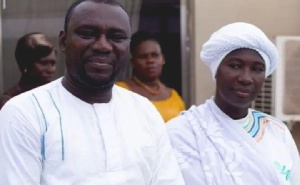 play videoCecilia Marfo and her husband

Cecilia Marfo opens up on prayer life and family

Cecilia Marfo discloses how she relates to her husband

Cecilia Marfo opens up on her strict character

Popular gospel singer Cecilia Marfo has shot down the perception that she controls everyone around her including her husband.

Cecilia Marfo said although she has a fierce personality, she never ‘plays lord’ over her husband adding that he is the head of their home.

Cecilia Marfo whiles speaking about her family during the Delay Show disclosed how she strictly imposes prayers on everyone in her home, including her husband.

The gospel minister said nobody dares to question her orders anytime she calls for prayers.

Cecilia Marfo said not even her husband can question her authority when it comes to prayer matters.

“I am someone who can tame even the strongest personality. We pray all the time. Almost all the time. Sometimes, we wake up as early as 1 am or even midnight to pray and I force everyone to wake up. It’s mandatory and nobody can question me. Not even my husband,” she told Delay.

It was after these statements that Delay questioned if she is the boss in her home.

Delay asked Cecilia Marfo if she controls her husband and she had this to say;

“I’m not the man of the house, my husband is. My husband is very strict. He has a calm personality but he is extremely strict. I don’t call him Paapa for no reason. I deliberately gave him that name. He is our father.”