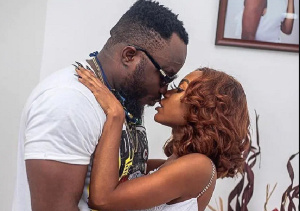 Rosemond Brown popularly known as ‘Akuapem Poloo’ has disclosed that DKB was drawn to tears when he visited her in prison.

Poloo said although she was in quarantine during the period DKB visited, she could spot him from afar weeping.

It can be recalled that the two once ‘best friends’ fell out after Akuapem Poloo accused DKB of stealing GH₵4,000 from some monies donated to her while serving her initial jail sentence sometime in April 2021.

Following the accusations, DKB vowed never to involve himself with issues relating to Akuapem Poloo and the two have not been on good terms even before her recent arrest.

But in a twist of events, DKB was spotted in a social media post, paying a visit to Akuapem Poloo while she was in the Nsawam Females prison.

Speaking on DKB’s surprise visit, Akuapem Poloo who is currently out of jail stated in an interview with SammyKayMedia monitored by GhanaWeb that;

“DKB came to visit me in prison and brought some gifts for me. He came there with my brother Kofi. I saw him from afar because I was in quarantine when he came. I saw him standing at the gate with my brother and he was crying. I didn’t expect to see him because he blocked me everywhere and since then we haven’t been talking.”

“I didn’t know he will come but that shows that he still loves me as a kid sister and whatever went on, he has overlooked it. I don’t take things at heart and I always accept criticisms when I go wrong,” she added.