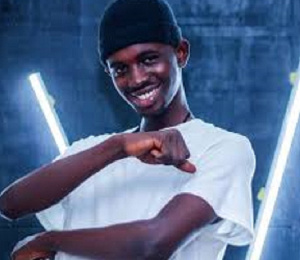 Sensation Ghanaian singer, Black Sherif might be known as one of the newest acts on the music scene who is super blessed with penmanship skills when it comes to the composition of songs.

Apparently, he has other talents up his sleeves and one of such talents is how to skate.

Back in time, skating was a big thing in Ghana but the case does not seem to be the same now. However, the ‘Second Sermon’ hitmaker has used a video available to zionfelix.net that back in the time, he was one of the best when it was about the skating game.

In the video, he was seen effortlessly moving up and down with the skate as he showed off one of two skills, including the popular bend-down skate riding. While he did all this, he was also heard singing the remix of his ‘Second Song’ which features the top Nigerian music act, Burna Boy.

Check out the video below…