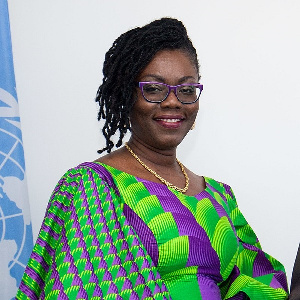 Ursula Owusu-Ekuful, the Minister of Communications

Ursula Owusu-Ekuful, on Peace FM, said that the majority caucus of Parliament has taken notice of the viral video and ‘returned the curses to the sender’.

She shuddered to understand why a woman will make such statements about a fellow woman and rain curses on her.

The Member of Parliament for Ablekuma West said that they will not respond to Hanna Bisiw but will pray for the curses to work on her and not Adwoa Safo.

“We all have blood running through our veins but we behave responsibly because of the position we occupy in the country. It is crass of the highest order. It is crass and not nice. How do you do that? As for us we have made it back to the sender. Whatever she wishes for Adwoa Safo, will come to her. Return to sender.”

Hanna Bissiw, in a radio interview, made a conditional statement that if Adwoa Safo was not in parliament on November 30 as she claimed to be then curses should fall on her.

She added that if indeed Adwoa Safo claims to have been the person in the House on November 30, was true, then all the curses should escape her.

The controversy over Adwoa Safo’s presence in parliament arose after pictures went viral on social media with some persons questioning if she was the one.

Samuel Okudzeto Ablakwa, the Member of Parliament for North Tongu, said the minority side of the house was going to probe the social media rumours.