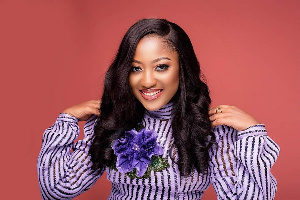 The co-host of the popular reality show Date Rush shared the photo of her with a huge baby bump on Twitter and expressed her excitement about becoming a mother for the first time.

Despite being famous, she has managed to keep her love life private. She has endeavored to keep her relationship secret from the public who always yearn to see who she’s dating.

Sharing the baby bump photo, she wrote: “The best gift ever. Can’t wait to show him to you all”.

It comes as shock to many to learn that Anita is pregnant considering how she was seen on TV and social media with a flat tummy just a few days ago.

While many are convinced that the TV3 presenter had indeed taken seed, other people have treated the picture as a hoax intended to generate controversy in the digital space.

To prove the doubting Thomases wrong, Anita subsequently shared a video of her with a protruding stomach to affirm the image is not photoshopped.

“Wei nso y3 editing ong? [translates as: Is this editing too?],” she asked a fan who expressed strong conviction that the photo was edited.