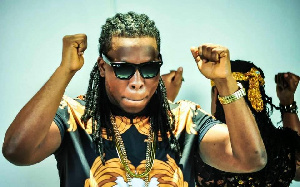 Ghanaian entertainer and entrepreneur, Edem born Denning Edem Hotor has revealed his plans to do giveaways after the Christmas celebration.

Talking to Amansan Krakye on Kastle FM in Cape Coast, the ‘Ghetto Arise’ crooner said Christmas presents should be given in January when people are going through hardships.

He remarked “I’m thinking of doing some giveaways in January and not the usual things in December.

He continued “Because I’ve come to realize that sometimes people talk about Christmas presents but it’s in January that the hardships really hit hard”.

The multiple award-winning rapper recently distributed some relief items to victims of the tidal wave that left thousands homeless in parts of the Volta Region.

He added “So I’ve been talking to my team that maybe we should look at what we can do right after Christmas and maybe do some giveaways.

“Even if it’s not going to be something substantial we’re looking at what we can do to support the fans,” he ended on Kastle Drive show.