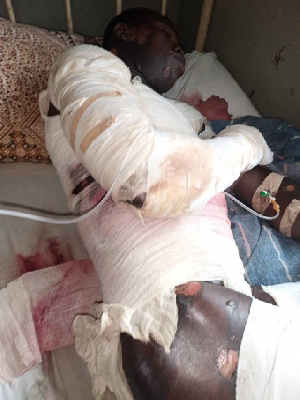 The victim battling for his life

A physically challenged galamseyer is battling for his life at the Ekwe Government Hospital after sustaining life-threatening burns at the hands of some security guards of a mining concession believed to be owned by Adamus Resources, a gold mining company at Nkroful in the Ellembelle District of the Western Region.

The guards arrested Michael Budo at the Anwia-Bokazo concession.

Narrating his ordeal from his hospital bed, Mr Budo said: “Yesterday [Thursday] around 7:30 to 8:00 am, I was attacked by land guards”.

“They took me to where the chanfan machines were and started beating me up with a belt”, he said.

The Social Responsibility Manager of Adamus Resources, Mr Francis Baah, confirmed the incident but said it was an accident.

“Yes, there was an accident. Our security patrol team on their usual patrols went to one of the pits and encountered these illegal people. One guy was arrested and made to carry a chanfan machine that contains fuel. The fuel got into contact with fire. The issue is currently under investigation”, he told Accra-based Citi FM.

The Esiama police command is investigating the matter.