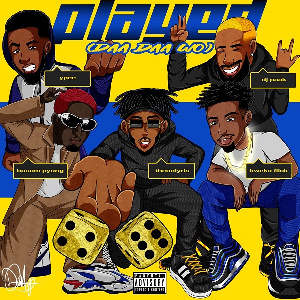 DJ PAAK has put together what he calls the Crusaders of the new school on this track titled ‘Played”.

As a hard knack live the song embodies the struggles of money making on the street level in doing what it takes “legally” but also endeavors to spend wisely as the aim is to build generational wealth. The track features the likes of Bosom Pyung, YPee, Kweku Flick, and RLS.

The jaw-dropping artist TheOnlyRLS was born in Amsterdam but is based in the UK. With releases such as; Treasure and Lock off Ft. Amerado, under his wing, and is ever so proud to show off his strong Ghanaian culture. RLS stands on set to transform the Afro-beat sound we are all familiar with.

Bosom Pyung the “Attaa Adwoa” hit-maker who is also known as Koofori has a unique fashion sense and also displays a rather wild range of dance moves whiles always spotting a red fire dyed hair as his trademark. His lyrical prowess is one to marvel at.

The sensational YPee is best known for his song “Meye Guy with multiple award-winning artists Sarkodie and Medikal. YPee started rapping at a young age where he did freestyle covers to songs from Sarkodie, Yaa Pono, Okyeame Kwame and continued throughout his educational career.

The talented Kweku Flick who’s passion for music began at an early age where he used to sing and rap with every opportunity that came his way.

He made a “Money” hit so it was only right to put him on the subject matter of this song which he does to a T.