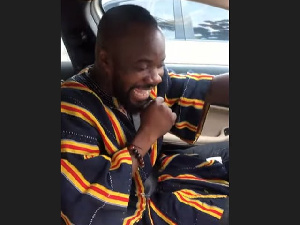 Kwame Oboadie has gotten himself something very huge for this Christmas as he has added another car to his already expensive fleet of automobiles.

In a video that has been spotted on his IG page, the radio presenter and part-time MC Kwame Obodie hilariously vowed never to give anyone a “lift” most especially the ladies because they didn’t respect him when he used to drive a Toyota Corolla.

Happy Kwame Oboadie showed his fans the nice interior of his cars as he beamed with glittering smiles throughout the video.

Kwame Oboadie’s car is a GLS because he revealed in the video that his newly purchased Benz car takes up to seven passengers.