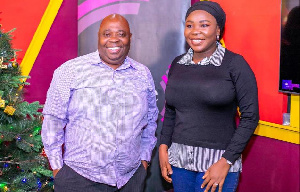 Commenting on her taste in Ghanaian music on Kumasi-based Pure FM as part of her discussions on a wide range of issues in the country, Hon. Fatimatu Abubakar narrated that she had to change her taste from Dancehall to Hi-Life when a friend in the USA introduced her to Kwame Adinkrah’s songs which came as a surprise to her because she had known him to be only a broadcaster.

“Wofa, let me tell you a story. You know I used to listen to these contemporary Ghanaian musicians. Dancehall was top on my list but something happened.

I went to New Jersey and I was in the car of a brother called Guy Gee to a shopping mall when he had a song on repeat which really got to me so I inquired the musician behind it and to my surprise, I was informed it was you.

That was when my focus was re-directed to Hi-Life. He played your songs back-to-back and I haven’t stopped listening to your music ever since.

My elder sibling even explained some of the lyrics to me. It’s amazing.” She narrated on Pure FM.

Ghanaian broadcasting icon, Kwame Adinkrah has warmed the hearts of many in Ghana and beyond with his great voice and musical dexterity, releasing hit songs after hits.

His current album “Kosopre” which features “Fiona”, “Nunu Me”, “Job Nisuo”, “Bome Powder” and a host of others are enjoying massive airplay both locally and internationally.

His previous collaboration with musician Kwabena Kwabena on the song called “Abena Dansoa” earned him the ‘Record of the Year’ award in 2012.

The Apotiti legend as he is affectionately called by his peers is currently the Business director of Kumasi-based Pure FM and the host of the station’s morning show “Pure Morning Drive”.