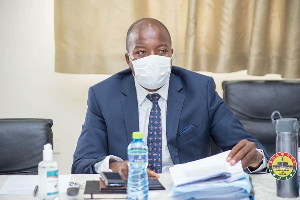 The Ghana Amalgamated Trust (GAT) has dismissed claims by Bawku Central Member of Parliament Mahama Ayariga that there are alleged negative activities ongoing at the GAT.

Mr Ayariga had accused the management of the GAT of taking undue advantage of some of the banks that needed financial help to enable them to meet the new minimum capital requirement set by the Bank of Ghana during the banking sector cleanup exercise.

“Clearly somebody is engaged in a scheme to pass on the increased value to some other people. This is unexplainable and I am asking the BoG to look into, to stop the process, if they persist and continue I will seek the support of my colleagues in Parliament,” he said on the New Day show on TV3 Thursday, December 23.

He had earlier in a statement accused the GAT of taking undue advantage of some of the banks that needed financial help to enable them to meet the new minimum capital requirement set by the Bank of Ghana during the banking sector cleanup exercise.

The GAT was founded by the Ghana Government based on a private equity model to support selected indigenous banks.

Its first mandate was to raise funds to recapitalize the selected indigenous banks that were unable to meet the new increased minimum capital requirement by the deadline set up by the BoG as part of the financial sector cleanup. As part of the recapitalization, GAT owns equity stakes in the banks that it has invested in.

But in a letter to the BoG, dated December 20, 2021, Mr Ayariga noted that the GAT is currently weakening the corporate governance structure in some of the existing banks.

This situation, he said requires the attention of the central bank.

“Recent events have necessitated the writing of this letter to your good office to bring some pertinent matters to your attention.

“GAT engaged the various banks at some time in 2019 when the banks urgently needed capital injection to meet the new BoG recapitalization requirement. Though some of the banks were, prior to the closing of the transactions, described as ‘solvent, well-governed and well managed’, these banks were forced by the circumstances of having to meet the BoG’s minimum capital requirement within the stipulated time frame to accept the officer from GAT.

“GAT knew the difficulty being faced by these banks and took undue advantage of them knowing full well and unbeknown to the banks how it intends to recover its equity investment in the banks,” he said.

He added, “GAT have since the competition of the transaction engaged in various negative acts that collectively seem to be geared towards weakening the corporate governance capacity of some of the banks thereby making them vulnerable within the financial sector.”

But responding to his comments the Chief Executive Officer of the Ghana Amalgamated Trust, Mr. Eric Otoo said the allegations are baseless.

“So to clarify the issue, I’ve seen a letter that’s been passing around on social media by the MP [Mahama Ayariga], as you indicated. And just to clarify, in the letter, the MP is indicating that GAT is selling shares of the banks that GAT invested in, as part of the government’s policy programme, and it’s actually not the case.

“So to present the real fact of the matter, GAT is not selling off at this point, not selling off shares in these banks that GAT invested in”, he told Accra-based Joy FM.