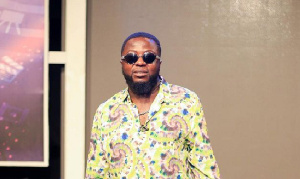 Rapper Guru has emotionally expressed his regret in investing in the defunct Wutah group.

It would be recalled that Guru brought back the duo together and invested heavily into their craft.

According to the rapper, that huge investment went down the drain because of their selfishness.

In a conversation with Christian Agyei Frimpong on Onua 95.1 FM’s lifestyle and Entertainment show, Anigye Mmere, Guru said apart from the financial loss he incurred, one of the group members disrespected him and his team.

“I spent almost Ghs 65,000 on Watah’s AK-47 video alone because my record label believes in quality. The funny thing about the contract was, it was a 50/50 affair”.

“Do you know how it ended? after the song ‘Bronya’ gained prominence, the artists came and said, we’ve not done much to merit 50 percent of their money, so they proposed 70 percent for themselves. We agreed on giving them 60 percent because they weren’t attending shows we’ve booked for them.”

Guru recounted that the duo verbally abused him even after sorting out the new financial arrangement.

“One of them said, “You small boy, you want to chop our money, what have done to merit that amount”. I am even polishing some of the words used on us. Ask Baby Dapaah. She can testify of the unprintable things they use”.

“Words that kill the human spirit, sometimes I regret investing into their craft. It was so filthy that I just had to let go of everything. All my investment went down the drain,” Guru bemoaned.

Guru is out with his new jam ‘Nana Ama’.