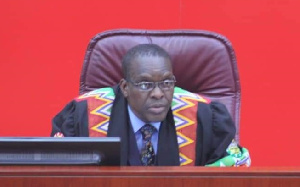 The Speaker of Parliament, Rt. Hon. Alban Bagbin, has made his first public appearance after the brawl that occurred in parliament’s chamber on Monday, December 20, 2021.

It will be recalled that majority and minority members of parliament clashed on the floor when the first deputy speaker, Joseph Osei Owusu (Joe Wise) attempted to make way for the second deputy speaker, Andrew Asiamah to preside over the house.

While the minority has defended its decision to oppose the move on the basis that it was a smart attempt by Joe Wise and the majority to get him participate in the voting process to determine whether or not the controversial e-levy bill be admitted under a certificate of urgency, the Majority has insisted Joe Wise was unwell and was only excusing himself to take his medication.

The majority caucus have largely blamed Alban Bagbin for being the cause of the fight as they contend that should he have been present in the house, it would have given them the numerical advantage to push through with the bill.

In his first speech at a forum to address former Members of Parliament (MPs) on Thursday, December 23, 2021, Alban Bagbin touched on issues that have come up post the fisticuffs.

Here are 4 key highlights of his speech:

1. NPP cannot “break the 8” if e-levy goes through

Alban Bagbin indicated that the New Patriotic Party’s quest to “break the 8” risk being jeopardized if the controversial e-levy is passed.

He mentioned that the party would shoot itself in the foot ahead of the 2024 elections if it does not backtrack on the bill which has received strong opposition from the minority caucus in parliament.

“As you go around convincing Ghanaians to vote for your party and you, others with big pockets are facilitating for your parties and when you win power, they get the positions…not you. So they don’t have that culture, they don’t have that understanding and there is that missing link. And they come to impose their ideas on you to put party interest first…not Ghana first and we always vote ourselves out of power which my colleagues in NPP are doing so don’t be surprised if the next election you don’t win”. Somebody will say “maka maka”. Ye,s it’s very clear if this your e-levy goes through, you have lost the election,” he said emphatically.

Alban Bagbin also took the opportunity to explain why he was absent on the night of the voting on the e-levy bill.

He explained that he needed to go and take a rest since the majority kept varying the order of proceedings of the house.

“I can give you a copy of my closing remarks which when I was leaving, I passed through my usher to give to them that it was after 10 in the night, and I had to go and take a rest because you delayed in sitting. I had to compel the house to sit after 2:00 pm, and I presided, I said let us discuss E-levy, you said no, rather the other business.”

“I kept on varying, and we did about 6 important items, approving other loans until I had to hand over getting to 6:30 to the first Deputy Speaker,” he detailed.

3. Bagbin comes clean on conduct as a speaker

Majority Leader, Osei Kyei-Mensah-Bonsu has in recent times launched scathing attacks on Alban Bagbin claiming he is on a personal vendetta to stall business of the house due to his insistence on getting the Minister for Finance to allocate 1.72 billion Ghana cedis to parliament.

But Alban Bagbin rejected such a claim stating that he was not a Chief Whip to bring MPs to the chamber.

Speaker Bagbin also insisted that he has been applying the rules of the house fairly with literature and experience.

“Now they say I refused to preside and that is why some numbers were not in the house. I am not a Chief whip of any of the caucuses in the house and I am also not entitled to bring members to the house. That is not my duty.”

“I am to preside and apply the rules and I have applied them fairly according to my understanding through literature and experience and I am not even sure that the members listened to what I read that day about the rules,” he stated.

Alban Bagbin reechoed his pledge not to be an impediment to government business in Parliament having been elected as the first Speaker in the history of the country to be from an opposition party.

“I will not do anything as a speaker to obstruct the business of government….never will I allow myself to be used as an errand boy of any president. It won’t happen. I have been given a privileged opportunity to bring a change to help the good of Ghana. I pledge to do nothing but that. I’m being blamed today for being the cause of parliament’s [inability] to take a decision on the e-levy and the [nuances] that we all saw. But you know, as I stand you can see me looking fresh and healthy but that doesn’t mean that I’m like before” he said.