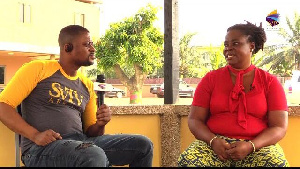 Sarah Adablah is a middle-aged woman who found herself in a bad marriage; she recounts infidelity and physical abuse from her ex-husband who refuses to leave her house even after their divorce.

Speaking on SVTV Africa Sarah indicated that her ex-husband planned to get her out of the house and threatened to kill her or wrongfully accuse her of an unlawful act. Before their marriage, Sammy (ex-husband) barely had a roof over his head and rented a room for him.

“After we got married, we moved into my 3 bedroom house. Soon after, he brought his girlfriend and introduced her as a cousin. Aside from that, I complained about how he related with a lady in the area and he beat me to a pulp. He even poured petrol on me but I tightly held onto him so he couldn’t light the match,” she narrated.

Moreover, Sammy has decided not to leave her house even after their divorce. According to her, the police have advised that she stay out of the house until he leaves to avoid any incident. However, she is scared of losing her home to a man who only enjoyed the fruits of her labour.

“One time, I went into the house for some clothes. I stay with a friend now. When I got into the bedroom, my ex-husband and her so-called cousin were having sex. I left without being noticed,” Sarah added.

Kindly watch the full interview below;