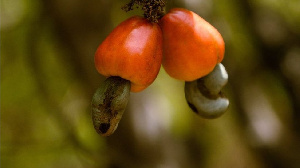 The government announced GH₵5.002 as the minimum price for the purchasing of cashew nuts

The maiden uniform purchasing price for cashew nuts for the 2022 crop season as announced by the government has been received with mixed reactions.

This was after the government announced at a stakeholder’s meeting at Wenchi on December 15, 2021, that it has finally set GH₵5.002 as the minimum price for the purchasing of cashew nuts.

Although many of the farmers commended the government for the initiative as it will prevent buyers from cheating them, a section of them argued that the maiden price of GH₵5.002 is not adequate and could have been pushed a bit higher.

A farmer, Mr. Anthony Oppong who was clearly not satisfied with the minimum price was of the opinion that it could have been pegged at GH₵6.00 to help farmers break even.

“We welcome the news but I am not satisfied as I would have wished that the price had been pegged at GH₵6.00 to meet the poor farmer halfway”.

Mr. Clement Anane, the National Secretary of Ghana Cashew Farmers Association proffered that the price should have been pegged against the US Dollar just like it is done on the international market to the advantage of farmers.

However, the National Chairman of Cashew Traders and Exporters Association of Ghana, Mr. Alex Owusu Agyei differed as he welcomed the maiden price indicating that it is in the best interest of traders, farmers, and everybody in the value chain.

Earlier the Chief Executive Officer of the Tree Crops Development, Mr. William Quaitoo had urged shareholders at the event to accept the price in good faith as the formula was determined after a series of engagements with farmers, traders, processors, and international experts.

He indicated that no buyer can buy cashew nuts below the minimum price of GH₵5.002 in the coming crop season.

The plan is aimed at diversifying Ghanaian agriculture to be like neighbouring Nigeria and Cote d’Ivoire.