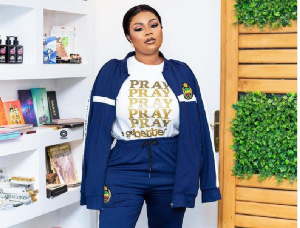 After bringing the heavens down during Stonebwoy’s BHIM Concert held at the grand arena in Accra on December 21, 2021, Empress Gifty has been subjected to attacks by some critics who have described such act as ungodly.

Empress Gifty was the only gospel act billed for the BHIM Concert but after putting up a spectacular show, she was criticized for sharing the same stage as ‘unbelievers’.

One can recall that the gospel minister, clad in a Bhim Nation branded regalia, took her turn on the stage with a thrilling performance at the dancehall event.

Although her striking performance received much applause from the audience, there is a section of Ghanaians who condemned the idea, adding that a gospel artiste should not be ‘equally yoked with unbelievers.

It was in this light that popular artiste manager, Kaywa schooled Ghanaians on the relevance of Empress Gifty’s decision to perform at a secular music concert.

In her Defence, Kaywa took to social media and wrote;

“God bless you Empress Gifty for taking the Gospel to where it’s really needed. This may be someone’s first hearing the name JESUS. Continue making Jesus proud and don’t listen to these modern Pharisees. Mark 16:15. And then he told them, “Go into all the world and preach the Good News to EVERYONE! THE LAST COMMAND,OUR FIRST PRIORITY.”