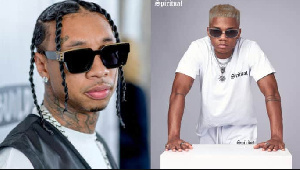 KiDi’s ‘Touch It’ is the most streamed Ghanaian song

In a video making rounds on social media, Tyga was seen gushing over KiDi’s song as he was captured jamming and vibing to it in a studio.

Tyga who appears to have already done justice to the song shared a remixed version on social media which has since gone viral.

This has somewhat sparked rumours that perhaps fans should expect a remix of KiDi’s ‘Touch It’ featuring the American singer.

One can recall that sometime in 2020, KiDi surprised fans with the remix version of his ‘Say Cheese’ song which featured American artist, Teddy Riley.

Meanwhile, KiDi’s ‘Touch It’ track is one of the numerous hits of the artiste which has transcended the shores of Africa and made it onto major global charts.

Off the ‘Golden Boy’ album, ‘Touch It’ is currently the most-streamed Ghanaian song on most music streaming platforms.

For instance, the song currently has hit over 20 million streams on Spotify and over 15 million views on YouTube.