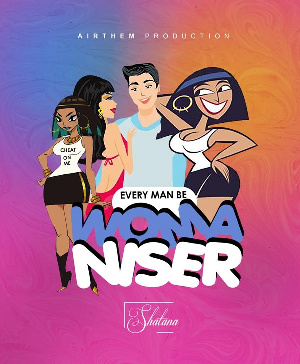 Ghanaian singer Shatana believes all men are naturally born as womanizers and are prone to cheating.

Propagating her womanizing gospel through her new single ‘Every man be womanizer’, Shatana believes men should be allowed to cheat.

She believes most women are going through emotional trauma and mental breakdowns because they haven’t come to the realization men, will always cheat and there is nothing they can do about it.

“Even in the bible, King Solomon and King David proved to be womanizers. In Ghana, there are a lot of big men, including politicians and religious leaders who are known womanizers,” She said.

“It is about time we the women understand and accept men are not created for only one woman. The earlier we (women) know the better it will be for us.”

Shatana highlighted women who are currently going through mental challenges or being in jail for assaulting or killing their partners because they couldn’t stand womanizing partners.

According to Shatana, womanizing is natural to all males and even equated it to male animals, who do not stick to just one sexual partner.

She believes cheating and womanizing are in the DNA of every man, this every man is prone to cheat.

Listen to ‘Every man be womanizer’ by Shantana below: