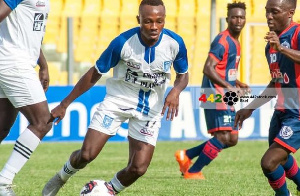 Captain of Real Tamale United(RTU), David Abagna Sandan is full of gratitude to everyone who has been pushing for the inclusion of local players into the Black Stars.

The RTU midfielder has been rewarded with a call up into Milovan Rajevac’s 30 man provisional squad for the African Cup of Nations tournament next month in Cameroon.

Most often than not local players have been snubbed when it comes to selecting players for the Black Stars with the majority of the list dominated by foreign based players.

Speaking in an interview with Fox FM, the midfielder says that he is grateful God has located him and will do his best to be a mainstay in the team.

“It has come to the time where the grace of God has located me.I pray that I go and prove my best and deliver.

To everyone who has kept pushing for the inclusion of local players in the squad,we thank them for having the confidence in us,we call on them to keep supporting us.”

“I thank coach Milovan Rajevac and everyone who saw my works and called for my inclusion in the squad.Another way of saying thank you is being at your best,I promise to be at my best” he said.