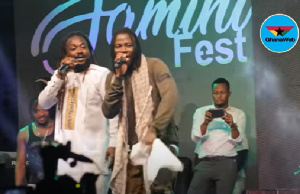 Finally, all the admirers of the relationship that Samini and Stonebwoy had in the music industry can heave a big sigh of relief as the two top musicians have finally smoked the peace pipe.

Stonebwoy and Samini had some kind of a fallout recently after the latter in an interview suggested that the former has not appreciated him enough despite all the things he has done to make him one of the most talk-about musicians in the industry now.

Those remarks of Samini struck a nerve of Stonebwoy and in reactions, he also came out publicly to say a lot of unpleasant things.

Those moments were not very comfortable for many music lovers but as of this morning, zionfelix.net can report authoritatively that all that bad blood that existed between the two is no more.

During Stonebwoy’s Bhim Concert last night, Samini stormed the stage as the surprise artiste and put up an electrifying performance with Stonebwoy.