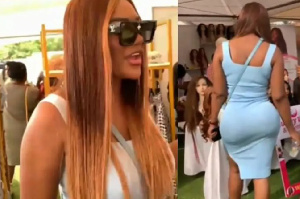 play videoSandra Ankobiah has been accused of undergoing liposuction

Several individuals have expressed shock after chancing upon Sandra Ankobiah’s booty and how it appears to have become bigger within a short span.

This was after a video making rounds on the internet captured the lawyer moving from stand to stand during a sales fair to make enquiries.

Sandra whiles walking around was caught on camera wiggling her heavy backside.

She was clad in a turquoise blue bodycon dress which defined her curves and booty.

Popular Ghanaian blogger, Nkonkonsa, who captured the moment, placed focus on Sandra Ankobiah’s huge buttocks and this drew the attention of Ghanaians.

Sandra’s protruding butt has sparked liposuction rumours as scores of individuals have alleged that she has gone through a body enhancement procedure.

Others made a mockery of how it looked.