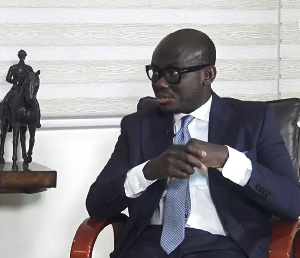 The Oslo District Court has dismissed a suit challenging the processes by the government of Ghana to acquire Embassy in Norway.

In December 2018, it was alleged that government had bought a $12m property in Norway to be used as an Embassy.

The cost was said to have been inflated before the property was bought for $3.5million.

The Attorney General (AG) and Minister for Justice Godfred Yeboah Dame has disclosed that an action challenging the processes of acquiring an Embassy in Norway has been dismissed.

Mr Dame who was delivering his Christmas message at a festival of nine lessons and Carols attended by the Vice President Dr Mahamudu Bawumia, the Chief Justice Kwasi Anin Yeboah and state Attorneys, said the suit was dismissed last Friday.

“In fact, just last Friday, (December 17), I received the good news from Norway that, the Oslo District Court has dismissed an action instituted against the government of Ghana in respect of the processes of the acquisition of an Embassy building in Norway,” the AG said of the litigation in the court of Norway.

According to the AG, his office has broken the storm and delivered the goods since ushered in office including dealing with over $70 million judgement debts.

“I was ushered into office with a huge judgement debt for more than $70 million waiting for me…Of course with the support of the team of Attorneys that I had, we broke the storm. We put our apts together – the Civil Division registered one victory after the other from the PDS action, which we won around June or July to the action against the Attorney General and the many other judgment debts which we avoided, we counted our victories as the year rode on.

Mr Dame also said, the plea bargaining bill which allows for certain offences against the State to be negotiated, has been laid before Parliament.

“I think that there is a lot that we need to be thankful to the Lord for, and the Legislative Drafting Division lived up to its billing. It delivered various legislation which will go a long way to reform the Criminal Justice System as well as helping the fight against corruption and the code of conduct of public officers’ bill which has already undergone stakeholders consultation… The laying of the plea bargaining bill (has been laid before Parliament) on Friday,” he noted

He also noted that, the Criminal Division also delivered its side of the bargain and prosecuted numerous cases, which of course helped in stamping out crime as well as eradicating corruption from the country of course they were not deterred in the effort by many people to put impediment on their way and all.

While looking into 2022 with a lot of hope in anticipation, the AG said, “Indeed if there is any Government that has demonstrated its support for the office of the Attorney General, it is the government of Nana Akufo-Addo.”

Over 80 vehicles to AG

The AG also noted that his office has taken delivery of some 89 vehicles that, have been procured for his office to ensure justice delivery.

According to him, the regional and the various agencies of the office of the Attorney General will receive the vehicles in the new year.

“Mr Vice President, as you will recall, when I took office, we were inundated with severe challenges. I made an urgent appeal to cabinet to support me and the President responded and directed the minister for finance to deliver some support for us. Indeed, the acquisition of computers…Through the directives of the President, all those problems were solved… The finance minister responded accordingly. And as I indicated at the Ghana Bar Association Annual Conference, by the urgent support of the minister for finance, vehicles numbered about 89 were procured for the office of the AG.

The AG while providing update on the Law House, said, it would be completed by the end of 2022.

“The finance minister committed himself to the completion of the Law House. The Law House is progressing steadily, it is last week that Architecture and Engineering Service Limited assured me that, the building would be completed by the year 2022.”

The Vice President Dr Mahamudu Bawumia in his good will message said Christmas has a deeper meaning than the usual merrymaking and called for peaceful coexistence with one another.

“Christmas has a deeper meaning than the good times that have and all of that. We are celebrating the birth of Jesus which is probably one of the most important events in the history of the world.

“It was a miraculous birth like no other born to the Virgin Mary, He performs so many miracles, He died and ascended to heaven, but we all know that Jesus will return the second coming before the day of judgment.

“But he lived a life which should guide all of us, love 9f our neighbours, as one of the commandments says..and He was the epitome of love, for the poor, for the sick, for the sinners. He was an epitome and Prince of peace, epitome of unity and that is really what we should all strive for in this country. Love, peace and unity.”