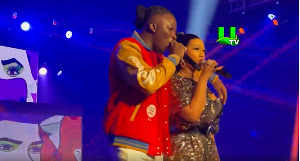 play videoMona4Real performs with Stonebwoy at the BHIM Concert

Mona4real performs live band with Stonebwoy for the first time

Budding Ghanaian singer, Mona Montrage popularly known as ‘Mona4Real’, has been captured in the news once again and this time around it is regarding her performance with Stonebwoy during the BHIM Concert held at the Accra International Conference Centre (AICC) Grand Arena.

Performing her popular single, ‘hit’ with Stonebwoy whiles being backed by a live band, fans noticed that Mona was veering off-key the whole time.

The popular Ghanaian socialite could not grab the right keys to her own song and was captured struggling in a quest to sing to her fans.

The audience seemed worried as Mona who owned that particular song was not vocal throughout her entire performance with Stonebwoy.

It appeared Mona abandoned the song for Stonebwoy and instead focused on joining the backup dancers behind.

Stonebwoy who finished with his part ended up singing Mona’s verses throughout their performance.