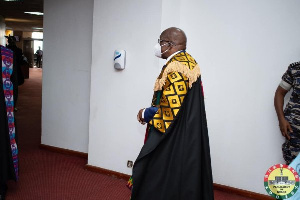 The Minority in Parliament, has explained that the absence of the Speaker Mr Alban Bagbin during deliberations on the Electronic Transfer Levy Bill, 2021, was due to the fact that he was recuperating.

Mr James Klutse Avedzi, the Deputy Minority, said this at a press conference in Accra, in reaction to an earlier press conference by Mr Alexander Kwamina Afenyo-Markin, the Deputy Majority, in which the latter alleged that the Speaker’s absence during the sitting of the House to deliberate on the E-Levy Bill was a deliberate act to frustrate the business of government.

However, Mr Avedzi said: “That is a complete lie. It is never true. We all know that Honourable Bagbin just returned from Dubai, where he went to undergo medical treatment.”

He recalled that the House on Friday, December 17, scheduled to sit on Monday, December 20, solely to deliberate on the E-levy at 1000 hours; adding that, however, the House ended up sitting around 16 hours on Monday.

“So, when the House eventually sat, we saw the business that they were tabling, completely different from the E-Levy that was scheduled for the day, and the Speaker cannot stay on beyond certain hours in the Chamber.”

Mr Avedzi said that was why after sitting for some few hours, the Speaker called for the First Deputy Speaker to take the chair for him to go and rest.

He indicated that in addition, when the House was on suspension, reconvening took a longer time, and that Mr Speaker could not stay at the disadvantage of his health.

“So, for him (Mr Afenyo-Markin) to say that Honourable Bagbin’s absence was deliberate is also not true.” The Deputy Minority Leader said.

Mr Avedzi said the Minority Caucus was surprised that the Deputy Majority Leader held a press conference to call on the Speaker to show leadership.

“We do not see anything that the Speaker of Parliament is doing, which shows that he is not showing leadership,” the Deputy Minority Leader said.

He noted that Mr Bagbin was one of the outstanding Speakers of Ghana’s Parliament.

Mr Avedzi said Mr Bagbin had all the experience from the first Parliament to the seventh Parliament and that they were fortunate to have him as the Speaker of the eighth Parliament; where he was putting before the entire country his experience as a former Member of Parliament.

“So, everybody should disregard all the comments (Mr) Afenyo-Markin made in relation to the leadership style of Mr Speaker, Honourable Bagbin,” Mr Avedzi said.