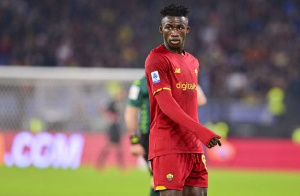 AS Roma youngster Felix Afena Gyan has been handed another callup to the Black Stars as doubts cast over whether or not the 18-year-old is ready for the 2021 African Cup of Nations.

In the squad that was announced by assistant coach Maxwell Konadu at the Ghana FA secretariat, Gyan was mentioned among the strikers Ghana would count on at the tournament in Cameroon.

In November 2021, Ghana coach, Milovan Rajevac handed the teenager a callup but the latter did not honour the invitation as his management felt the player is not ripe to represent his nation.

“I felt it was too early for me to answer the call from the national team because I need to grow, physically but also mentally and psychologically”, Gyan revealed to ace Italian journalist Gianluca Di Marzio.

His agent, Oliver Arthur, speaking whether his client could be ready for AFCON said:

“For AFCON, I can’t say he is ready now, AFCON is for two months, and it’s a long time,” he told Joy FM.

Afena has scored two goals for Roma in 4 appearances so far this season, becoming the first player born in 2003 to score in the Serie A.

A tweet by award-winning sports journalist Saddick Adams shows that the Afena Gyan will miss the AFCON and will not be replaced by coach Milo.

I’m reliably informed that Roma youngster Felix Afena Gyan is highly unlikely to play at the Afcon in Cameroon. The player is 95% staying at Roma atm and GFA are aware. No replacement will be invited.