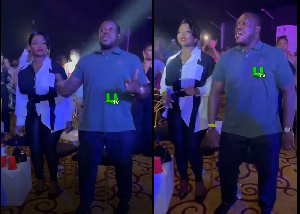 play videoSam George with his wife at Bhim Concert

After a very tough two days in parliament over the passage of the E-ley bill, the Member of Parliament for Ningo-Prampram, Sam George decided to ease off some stress on Tuesday night by attending Stonebwoy’s Bhim Concert at the Grand Arena in Accra.

Sam George often referred to as Dzata was seen with his wife having a good time together at the concert.

The event was attended by many fans of the Dancehall musician Stonebwoy who flew in Jamaican top art, Beenie Man for the event.

Sam George who could not resist the ecstatic performance of Stonebwoy was on his legs with his wife as they both danced to the sweet tunes of the Ghanaian dancehall art.

It appears Sam George used the event as a birthday present for his wife who celebrated her birthday on Tuesday, December 21.

The politician had earlier tweeted “Bone of my Bone. Flesh of my Flesh. As you celebrate your birthday today, may your joy know no bounds. May your barn always be full and the desires of your heart be met. I celebrate you today and every day my Vera. Wife, Mother & Lover, happy birthday, Babes.”