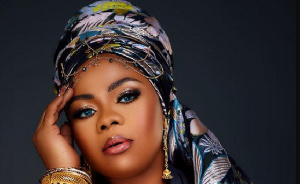 The organizer of Bhim Concert, Stonebwoy has described the performance of the only gospel musician billed for the show, Empress Gifty as amazing.

According to him, the Ghanaian gospel heavyweight, Empress Gifty last night thrilled thousands with her electrifying performance.

Stonebwoy invited Empress Gifty to his waiting area to express gratitude for gracing the event and leaving lasting memories.

Empress Gifty who was the only gospel artiste on the bill gave a good account of her ministry with an irresistible live band performance which got many awed.

The gospel minister, clad in Bhim Nation branded outfit took her turn on the stage with a slow reggae rendition of No Jesus, No Life song.

She then switched to her Fefeefe song, which got the whole auditorium singing along.

The icing on the cake was the short praises to wrap up her performance, an act that took patrons to another level.

Her striking performance received much applause from patrons and some industry players.

According to them, it was a good strategy to win souls for Christ at such an event, and a good statement for gospel music.

Empress Gifty is out with her new song dubbed ‘Eye Woa’, which is currently making waves in the country.