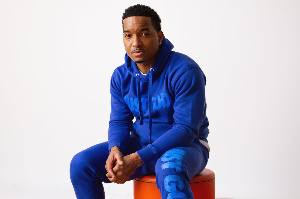 JC is in Ghana

JC chose Ghana as the destination for his first ever visit to Ghana and fans are thrilled to see him perform.

According to JC, he is in Ghana to have a feel of the atmosphere, project his craft and as well connect with the African culture and or root.

He also stated that he would be embarking on a couple of musical projects. When quizzed the A-list artists that he would love to work with during his short stay in Ghana, JC mentioned Shatta Wale, Stonebwoy, Sarkodie and other musicians who could easily connect with his vibes as those he has in mind.

The NMS Records artiste also said he was well welcomed at the Kotoka International Airport by the immigration officers; a move he sees as a perfect start for his stay.

He also disclosed that he is working on a new project with legendary American rapper Rick Ross.

JC has a lot of hit songs. Notable among these hit songs are For Me, No Filter featuring Jacquees, SkyCrapin featuring Calboy, etc.

JC is expected to kick start his media tour with his first interview scheduled on December 24, 2021, on Accra Fm.