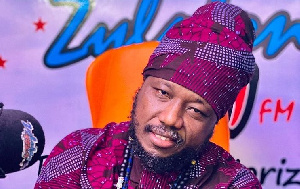 Hell broke loose in the chamber of the House on Monday, December 20, 2021.

The MPs had among other businesses gathered to vote on whether or not the E-levy should be adopted under a certificate of urgency.

A GhanaWeb report said at the time, Joseph Osei-Owusu (Joe Wise) who was presiding stated that he was stepping down to vote so, the Second Deputy Speaker should take over.

According to the report, the Minority had earlier contended that per parliament’s standing orders, the Speaker of Parliament does not have a casting vote, however, Joe Osei-Owusu indicated that he would still vote.

“Just when he was about to step down for the Second Deputy to take over, the Minority took the stage. In the process, the Minority clashed with the Majority with members of both sides exchanging blows. One of the MPs on the Majority side was dragged to the floor with his shirt torn,” the report said.

However, speaking on his Taxi Driver show on Zylofon FM Tuesday, December 21, Blakk Rasta observed that, the conduct of the lawmakers was unremarkable.

He wondered why parliamentarians who have been voted for by their constituents to represent them in the decision-making of the country will abandon the business of the House to engage in fisticuffs.

Reacting to a new twist that Joe Wise was substituted because he needed to take his medication, Blakk Rasta said unknown to Ghanaians, many of the MPs could be suffering from cancer.

“Before you know, all these people have cancer. They wanted us to vote for them so that they can overburden us with their medical bills…” he claimed.