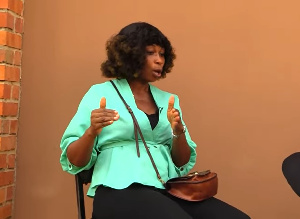 Baby mama of the CEO of Hubtel, Stella Barnes

Baby mama of the CEO of Hubtel, Stella Barnes has disclosed that Mr Alex Bram has refused to allow her to visit or see her twins boys for the past six years with no prior notice or reason.

In an interview with DJ Nyaami on SVTV Africa, Stella indicated that Mr Alex Bram initially denied responsibility until an Accra based court ordered for a DNA test to be conducted. Even after the test verified her claim, she catered for the boys till they turned four when her business failed.

“At the time, I had invested in a movie but it failed. So I contacted him to help with accommodation but he didn’t. Later I sent the kids to his parents with a friend and waited for hours. My friend has to leave so I had to see her off. When I came back they had locked the gate and I tried to contact them for a week but to no avail,” she shared.

According to her, all efforts to see her twins has proved futile. She mentioned that Mr Bram has seized all forms of communication and even took away the boys’ phone for contacting her.

“They took my contact from my baby daddy’s parents and called me but when they realised it, they confiscated the phone. In six years I’ve only seen them once. Alex Bram’s sister called me to come and visit when they spent the vacation with her,” she recounted.

Stella added that both parents of Alex Bram are incapable of taking care of the children because they are unwell due to old age. Alex has hired house helps to cater for the kids when “I’m alive. I’m better off now in terms of finances and I can be responsible for them. Alex told me once that if he gives them to me, he won’t be responsible for them ever again.”

Stella has taken the case to DOVVSU but she stated that the institution failed to perform its duties.

Kindly watch the full interview below;