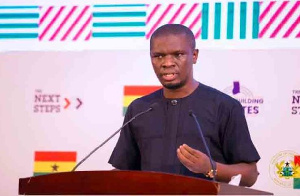 Oppong Nkrumah calls for punishment for some MPs

Jamaludeen Abdullah, an aide to the Minister of Youth and Sports, Mustapha Ussif, has confirmed that the minister indeed suffered cuts from a sharp object during the clash between Majority and Minority sides of Parliament on Monday, December 20, 2021.

Jamaludeen tells GhanaWeb that Mustapha Ussif sustained a cut from a sharp object close to the eyes but is recovering from the incident.

He stated that the MP for Yagaba-Kubori is hale and hearty and discharging his duties as both MP and Minister.

Mustapha Ussif was a victim of the cut during the brawl that ensued in the chamber between both sides of the house.

The Minority side of the house, who were unhappy with the decision by the first Deputy Speaker, Joseph Osei-Owusu, to stepdown for the second Deputy, charged towards the Speaker’s seat to whisk it away.

The Majority side squared up to them to prevent them from getting to the seat and in the process Mustapha Ussif was assaulted by some of the enraged MPs.

The melee led to a rescheduling of Parliamentary sitting to December 21, 2020.

On Tuesday, the house decided to suspend sitting sine die. It is expected that the house will reconvene in January 2022.