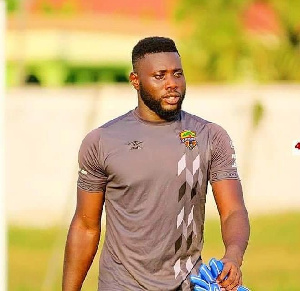 Hearts of Oak goalkeeper Richard Attah has been named in the provisional Ghana squad for the 2021 Africa Cup of Nations.

Attah is among five home-based players in the 30-man squad announced by head coach Milovan Rajevac on Tuesday.

However, he is the only shot-stopper from the Ghana Premier League.

Attah has overtaken Asante Kotoko’s number one Razak Abalora as the Black Stars trusted goalkeeper from the local league.

Abalora since the error in a friendly match against Morocco in July hasn’t been invited while Attah has received several call-ups.

He will hope to make the final squad which will be submitted to CAF on December 31.

Black Stars will begin camping on Wednesday, December 22, 2021, in Qatar city for a 17-day training camp in preparation.

They will play three friendly matches while in Qatar. The Ghana Football Association has already concluded talks with Algeria while engagements are ongoing for two additional matches.

Black Stars will depart Doha for Yaoundé on Friday, January 7, three days before their opening match against Morocco.

After Morocco, Rajevac’s side will take on Pierre-Emerick Aubameyang’s Gabon and then wrap up their group stage campaign against debutants Comoros.