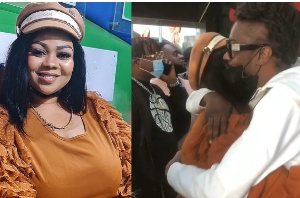 Gospel musician, Empress Gifty Adorye could not hold back her emotions after she met Jamaica’s top music icon, Beenie Man for the first time in Ghana.

Empress Gifty was heard telling Beenie Man in the video saying that she has been one of her biggest admirers from time immoral and as such she will forever cherish this moment of meeting her physical for the first time.

Beenie Man also responded positively to this show of affection and admiration from Empress Gifty and engaged in a short chit-chat with her after their hug.

It must be noted that Beenie Man is in Ghana currently as one of the major acts who will perform during Stonebwoy‘s 2021 Bhim Concert slated for Tuesday, December 21, at the Grand Arena.