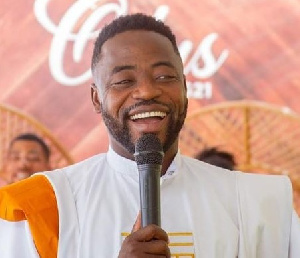 Popular Ghanaian comedian, Foster Romanus has established that comedians are not always bubbly and excited as many people perceive.

According to him, comedians just like every human being face countless challenges in their line of work.

Recounting some of his bad days during the early times of his career, Romanus in an exclusive interview with GhanaWebTV said;

“Some event organizers do not even put comedians in the right space. They think once you are a comedian, you can perform anytime. They don’t give you good times to perform. At a point I was cracking a joke at a cocktail event, I was ignored so I cut the joke short and walked off-stage. I told myself that the next time they hear of me, they’ll rush for me. That is what mostly I tell myself when I have a bad day. I always live to fight another day.”

“As long as you have good days, you’ll have bad days too. It shouldn’t limit you. Rather, you should learn from it. That shouldn’t stop or define who you are,” he added.

Meanwhile, the 3rd edition of ‘Romanus Incomplete’ is slated for December 23, 2021 at the National Theatre.