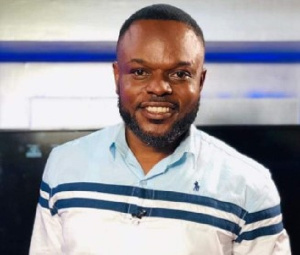 Londona, a known media personality in Ghana, has shared his opinion on the name ‘Blackstar Films’ being chosen as the brand name of Ghana’s film industry by the National Film Authority (NFA).

He believes that the title ‘Black stars’ has been put on too many things in this country and that is even hindering the country’s progress. He cited the Black Stars football club as an example, saying that they do not even know what they are doing and that is the impact of their title on them.

The usage of the title has however been put on hold by the Minister of Tourism, Arts and Culture, Awal Mohammed as he is currently engaged in conversations with the NFA and other stakeholders who disagreed with the title.

“I wasn’t excited about the name ‘Blackstars Films’ and I think putting it on hold is a good thing. They need to think about it again and I am looking forward to a name that depicts Ghana more. Black Stars has been overused and I think the Black attached is not even benefitting us”, he said.

Popular sound engineer, Fredyma, also speaking on the show, added that he does not support the name ‘BlackStars Films’ too and he would have preferred the option ‘Gold Coast Pictures’, hence, suspending usage on the name to hold further meetings about it was a good idea, and he hopes they come out with the best.