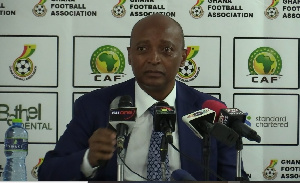 Confederation of African Football president Dr. Patrice Motsepe visited the Olembe Stadium today and urged Africans to believe in themselves.

He made this statement after weeks of endless news from the western media about the cancellation or impending postponement of the AFCON to threats from ECA preventing African stars in the various European leagues from competing at the AFCON.

While touring the Olembe Stadium one of the stadiums to host the 33rd AFCON Dr. Patrice Motsepe said he will be at the opening ceremony.

“I will be there on January 7 with my whole team for the kick-off on January 9. Africans need to believe in themselves and stop being too hard on themselves. I will be with women and children on January 7 since we are already all Cameroonians now,” he said

The local organising committee (LOC) and the Cameroonian FA at a press conference stated emphatically that the tournament will come on and football fans should ignore any news that says otherwise.