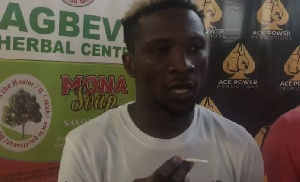 Ghanaian boxers drawn up in the Brawl in Accra fight night are promising nothing but thrilling and captivating display of boxing on Saturday December 25, 2021.

At a media work out on Wednesday, December 15, 2021, the boxers took turns to explain to the media what their fans should expect from the game.

Ghana-based Nigerian boxer Joshua Oluwaseun Wahab vowed a knockout against his opponent and assured of his readiness for bout.

He indicated he has been preparing feverishly for the bout and will give a sterling account of himself on the day.

Wahab will be making a defence of his Africa junior lightweight he won in Nigeria against Jackson Malinyingi known widely as Kid Tyson.

He vowed to make light work of his opponents and bring smiles on the face of his fans.

Holy Dorgbetor said that he has been training hard for the bout and will give his fans an Xmas treat on the day.

He is confident of mounting a successful defence of the Ghana featherweight title he won in October.

He will be facing Emmanuel Otoo and confidence is rife in his camp that victory is his.

The Chief Executive Officer of Ace Power Promotions who are the brains behind the bout appealed to Ghanaians to purchase the tickets for the bout.

He is certain with any sense of doubt that the night will be a great advertisement of Ghanaian boxing.

He disclosed the crème-de-la-crème of Ghanaian boxing talent have will be paraded on the night.

Other fights on the stacked bill come Christmas Day include highly rated Robert ‘Stopper’ Quaye (20-0, 17 KOs) versus a yet to be confirmed opponent, Michael ‘One Bullet’ Ansah against Samuel Turkson at lightweight and Daniel Aduku versus Moses Lartey at super welterweight.