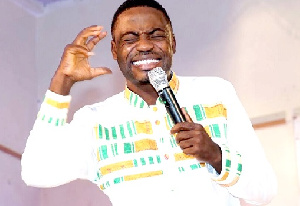 Foster Romanus discloses the challenges of being a comedian

Foster Romanus narrates how he prepares for comedy shows

Popular Ghanaian stand-up comedian Foster Romanus has disclosed that preparing for a comedy show is usually saddled with a lot of pressure and sleepless nights.

Most often, many individuals perceive comedy as a God-given talent, and as such not much is invested in terms of preparations before comedians step on stage.

Although one of the requirements of being a good comedian is to be able to deliver jokes spontaneously, Romanus has disclosed that even in such instances, the jokes need to be properly arranged.

He established that in order to satisfy the audience, there is the need for every comedian to equip him or herself with thorough research and critical thinking.

“Most importantly, sleepless nights. You have to be rehearsing over and over again to get your lines right and well arranged. You have to think about how to put together the jokes and how to present it also becomes another headache. You need to go and read online to furnish yourself if need be. It’s a lot of work,” He exclusively told GhanaWeb.

Meanwhile, the 3rd edition of ‘Romanus Incomplete’ is slated for December 23, 2021 at the National Theatre.