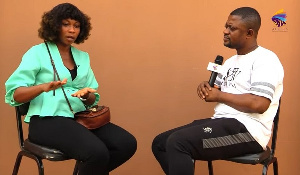 Stella Barnes and host of the interview

Ghanaian woman, Stella Barnes has revealed that she has lost confidence in the Domestic Violence and Victim Support Unit (DOVVSU) and the court because they could not help her get her children back.

Speaking on SVTV Africa, Stella indicated that the institution failed to do the needful when she filed a complaint and also required that she pay for another letter to be served to her baby daddy who rejected the first.

“DOVVSU transferred my case to a juvenile court. Initially, I paid a total of 180 Cedis for the letter to be served to my baby daddy but according to the bailiff, my baby daddy sacked him out of his office rudely.

“After they asked me to pay again for another letter to be served.

But at the time, I was not financially stable for such payments. I’ve lost confidence in them especially if you’re a poor mother,” she revealed.

Stella added that her baby daddy is a very successful man who “thinks he can get away with everything because he’s rich. Presently, my children live with his parents who are both ill. I don’t know why he doesn’t want me to see them when I’m alive and capable,” she said.

Kindly watch the full interview below