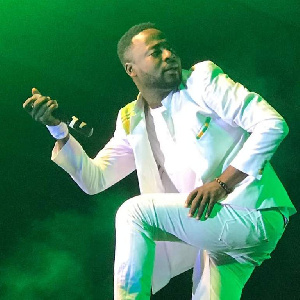 Romanus highlights how Samini’s songs have impacted him

According to the popular stand-up comedian, Samini is the only secular artistes he has established a strong connection with.

Touching on how he became attached to the dancehall artiste, Romanus said Samini’s songs were his ‘ray of sunshine’ during a challenging period in his life.

To prove the extent of their friendship, Romanus recounted a point in time when Samini freely offered his pub to him for a show.

“Aside from some gospel artistes, the only musician I really like is Samini. My whole love for Samini is because of the fact that at certain instances of my life when things weren’t going on well, most of his songs actually kept me going. They inspired me a lot and they gave me some motivation. There is something about him that I see in what I do so I just feel like I have a connection with him,” he stated in an exclusive interview with GhanaWeb.

“We met a couple of times. Anytime we meet, we vibe. He is one cool guy who even appreciates the fact that I do his tracks. One time he posted me on Facebook, hyping me and all. He even gave me his pub to do my comedy show for free which he himself was present,” he added.

Romanus has also performed Samini’s song at his comedy shows. His 3rd edition of ‘Romanus Incomplete’ is slated for December 23, 2021 at the National Theatre and it is expected that he will replicate it.

Watch the video below.