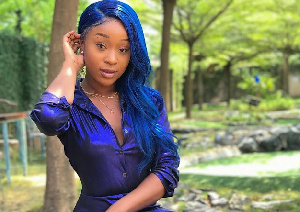 Efia Odo has made a very controversial statement on social media that has got many people watching her with the tail of their eyes.

According to the 27-year-old actress and socialite, she has never depended on a man for survival in her life. This is to say that she has been the sole sponsor of her lavish lifestyle, expensive clothes, trips to exotic locations among others.

This statement from Efia Odo appears to be a subtle response to several unsubstantiated rumors that she’s been sleeping around with men to pay her bills.

But she took to her Twitter page to put the false claims to beg as she brags about being self-independent and never having to depend on any man for anything.

Efia whose real name is Andrea Owusu added that she would not even stoop so low to have sex with a man for pleasure, instead she’ll play with herself to attain that same pleasure.

In a tweet, she wrote: “Self-made never depend on a ni**a for sh*t not even for some d*ck I’ll rather play with my cl*t #EtotheO”

According to Efia Odo, her tweet was the lyrics to a song she claims to be writing. She was quick to reveal this when a curious fan question the reason behind her post.

A quick search on the internet showed that the words she weaved to create a nice rhymic verse were an original creation by herself.

Perhaps Efia Odo is taking lessons in starting a music career to establish a brand for herself because as it stands now no one knows what her talent is, except for the fact that she’s the queen of body exposure on social media.