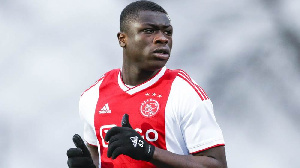 Dutch-born striker of Ghanaian descent, Brian Brobbey is returning to Ajax in the January transfer window less than a year after he left the club.

Although he was in line to enjoy regular playing time, things have not gone according to plan.

After eight months, information exclusive to footballghana.com has confirmed that Brian Brobbey is on his way back to Ajax Amsterdam.

Sources have confirmed that negotiations between RB Leipzig and Ajax are at an advanced stage.

Although he will stay with RB Leipzig for the remainder of the season on loan, the German club will absorb his salary in full.

In the deal, no buy-back clause has been included and the striker will finally complete his move back to Ajax next summer.