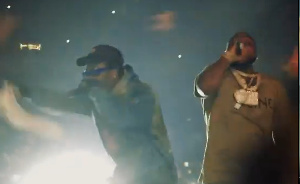 Darko Vibes was on stage with Davido on Saturday

The two have a song titled Je M’appelle

It was an ecstatic moment when Ghanaian-born musician and composer, Darko Vibes joined Nigerian star, Davido to perform their hit-single ‘Je M’appelle,’ for the first time at the Accra Sports Stadium on Saturday.

Davido was on stage performing when all of a sudden, the DJ dropped Je M’appelle and out of nowhere Darko Vibes just jumped on the stage to the surprise of fans at the GTCO Concert.

The fans went gay after seeing Darko on stage and the two musicians had a good time performing the song to the fans for the first time.

Although many fans have expressed doubts about Davido’s ability to sing in Ga, the B.E.T award winner literally sang the song without missing a word.

Je M’appelle was an instant hit after it was dropped in September 2021 and was described by many as a Christmas banger.

The song is well-versed in experimental music that combines highlife, hip hop, and rap.