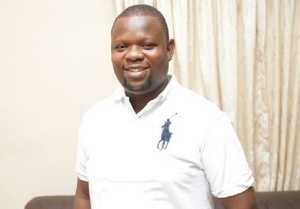 Kwame Zu, the Ashanti Regional Secretary of the National Democratic Congress suffered what has been termed as an embarrassment as he was not allowed to conclude his solidarity message at the 2021 Conference of the New Patriotic Party.

Kwame Zu commenced his speech with good wishes for the NPP before hitting at the government for their failure to honor their promise to Ghanaians.

He highlighted the hardship in the country and chided the government for doing little to address the issue.

Kwame Zu, who like all other political parties, had three minutes to deliver his message said that the government was compounding the woes of Ghanaians with the controversial Electronic Transaction levy (E-levy).

However, the concluding part of his message was not heard as he was interrupted by the MCs of the event in the persons of Former Minister of Tourism Catherine Afeku and National Youth Organizer of the NPP, Henry Nana Boakye.

Just when he began the last bit of his message in which he sought to hail John Mahama as the candidate who would win 2024, the MCs stepped in prevented him from finishing it.

Determined to finish his speech, Kwame Zu kept shouting into the mic but the duo of Afeku and Nana B overpowered him.