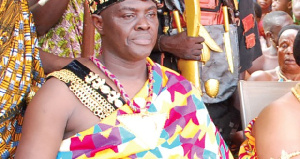 The Bono Regional House of Chiefs has called on the government to speed up the development process to facilitate rapid socio-economic growth and development of the region.

Osagyefo Oseadeeyo Agyemang-Badu II, the President of the House, who made the call, said rehabilitation of the Sunyani Airport, construction of the Nana Bosoma Central Market and the Sunyani Library were long overdue and ought to be completed.

He said the region also needed a standard sports stadium and improved road networks to boost trade and commerce.

Osagyefo Oseadeeyo Agyemang-Badu II, also the Paramount Chief of the Dormaa Traditional Area, was addressing the Annual General Meeting of the House in Sunyani.

Commenting on a recent demonstration by the Sunyani Youth Development Association, the Paramount Chief said development issues raised by the association were of utmost importance and called on the government to look into and address their petition.

Osagyeo Oseadeeyo Agyemang-Badu II said the chiefs were not against the rehabilitation of the Sunyani Coronation Park but added “our region requires a modern stadium to promote sporting activities.”

He called on the chiefs to be advocates of fire safety in their respective communities and help control fire outbreaks in the dry season.

Madam Justina Owususu Banahene, the Bono Regional Minister, expressed the government’s appreciation to the chiefs for their cooperation and support towards the development of the region and gave the assurance that the region would get its equal share of the national cake.

She said work on the Sunyani City Inner Road project, being executed by the Sinohydro Corporation of China, was progressing, saying about 75 percent of the drainage works had been completed.

Mad Owusu-Banahene appealed to the chiefs to help instill socio-cultural moral values in the younger generation.