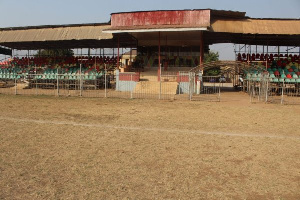 The Club Licensing Board (CLB) of the Ghana Football Association (GFA) has given approval for the Sunyani Coronation Park to host Division One league matches from Sunday, December 19.

This follows the successful rehabilitation of the park by the National Sports Authority (NSA) to meet the required standard of the FA.

Mr. Foster Kwame Opoku Boakye, the Bono Regional Director of the NSA told the Ghana News Agency (GNA) sports, B/A United FC would host Dreams Tamale FC at the Coronation Park in the week six matches of the league at the park on Sunday.

Tano Boafoakwa, B/A United, and Young Apostles, Sunyani-based FCs as well as Baffour-Awuah Soccer Academy at Nsoatre in the Sunyani West Municipality qualified to play the 2021/2022 Division One League matches at the Park.

But, the CLB ordered a rehabilitation of the coronation park because it was not up to standard, and since then the four clubs had been playing their league matches at different venues in Bechem, Techiman, and Nsoatre.

Mr. Boakye said he was happy the coronation park “is now in a desirable condition to host the matches”, and thanked all who supported the rehabilitation works.

Work on the inner perimeter as well as the tunnel which connected from the pitch to dressing rooms were completed, during a visit by the GNA Sports.

Wire meshes have also been raised around the inner perimeter to prevent supporters from entering the pitch.