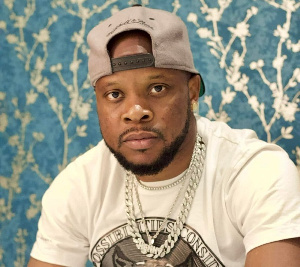 Geo Wellington’s debut album “Let’s Get It” is a love-fest powered by unconventional vocals and beat selections that have the versatile artist lean on entirely Afrobeat.

“Let’s Get It” has the UK-based Ghanaian act bring fans 11 songs and a feature list that includes the likes of Drumz, Fameye, Kelvyn Boy and frequent collaborator, Young Rob. There’s also two pre-released songs; ‘Tik Tik’ and ‘Yenko’, both featuring fellow UK-based Ghanaian star, Young Rob next to the 9 all-new songs on offer.

“The making of this project has been a big journey for me and I’m glad it’s finally complete. It goes to show that we can get anything done as long as we believe in ourselves. That’s my message to fans and I hope they enjoy what I have in store for them”, shared Geo Wellington.

Like you’d expect from a title this daring, or motivational if you may argue, “Let’s Get It” is big on the Afrobeat trend. It is brought to an animated start by a brief intro of the same name, one perfect in readying fans for a back-to-back drop of love songs – ‘Give You’ (feat. Fameye), ‘My Baby O’, ‘Enyonnam’ (feat. Drumz) and ‘Picture Perfect’, all rocked by drum-laden productions that are attention-grabbing and dance-inducing.

In the thick of its atmosphere of love, however, there’s a couple of songs that have Geo Wellington drift beyond the love barrier. Titles like ‘Big Man Ting’ and ‘One Day’ feel more in line with the album’s title; the former being about how ready the star is to be a show-off and the latter hinging on inspirational energy. ‘Sweetie’ swoops in as another new addition to revive the artist’s love persona, before concluding yet another song of the same weight, ‘Selase’ (feat. Kelyvn Boy).