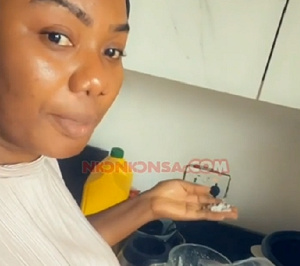 Ghanaians descend on Bridget Otoo for being unable to cook

Bridget Otoo in search of a ‘house-keeping husband’

Some Ghanaians have expressed amazement after chancing upon a viral video in which Bridget Otoo was rigorously grinding the local Ada salt in a blender.

The salt which is usually in a rocky form is used in its original state for cooking but it appears that procedure does not apply in Bridget Otoo’s kitchen.

Bridget in a bid to steam some chicken said she is used to granulated salt to an extent she blended the local salt without fear that her blender could be damaged in the process.

After the salt was blended, it did not end there as Bridget was confused about the right amount to be sprinkled on the chicken before steaming.

“So I decided to cook today but I have a big headache. Because I haven’t cooked in a long time I don’t have iodated salt, I have the big rocky ones instead. I don’t have that one so I’ve decided that I’m going to blend the salt so it becomes smooth in order for me to use it. I’ve never seen anyone blend salt before but I’m going to try. There’s no one to buy me the salt so I have no option”, she remarked.

Some followers have trooped into the comment section of the post shared by Nkonkonsa with all manner of criticisms.

This is not the first time Bridget has publicly broadcast her culinary and housekeeping skills.

One can recall that the Metro TV newscaster who finds these skills cumbersome earlier announced her interest in a man who can clean and cook all day in the week to be considered for marriage.